2015 Innovations Awards: The 3 biggest game-changing construction machines of the year

Our 2015 Innovation award winners include an excavator that goes into semi-automatic mode every time you get close to the target surface, a pickup truck body that was the talk of 2014 and a generator with massive capabilities to give power to remote even Third World job sites and communities. Go with us into the design process as we examine how these standout products were created. 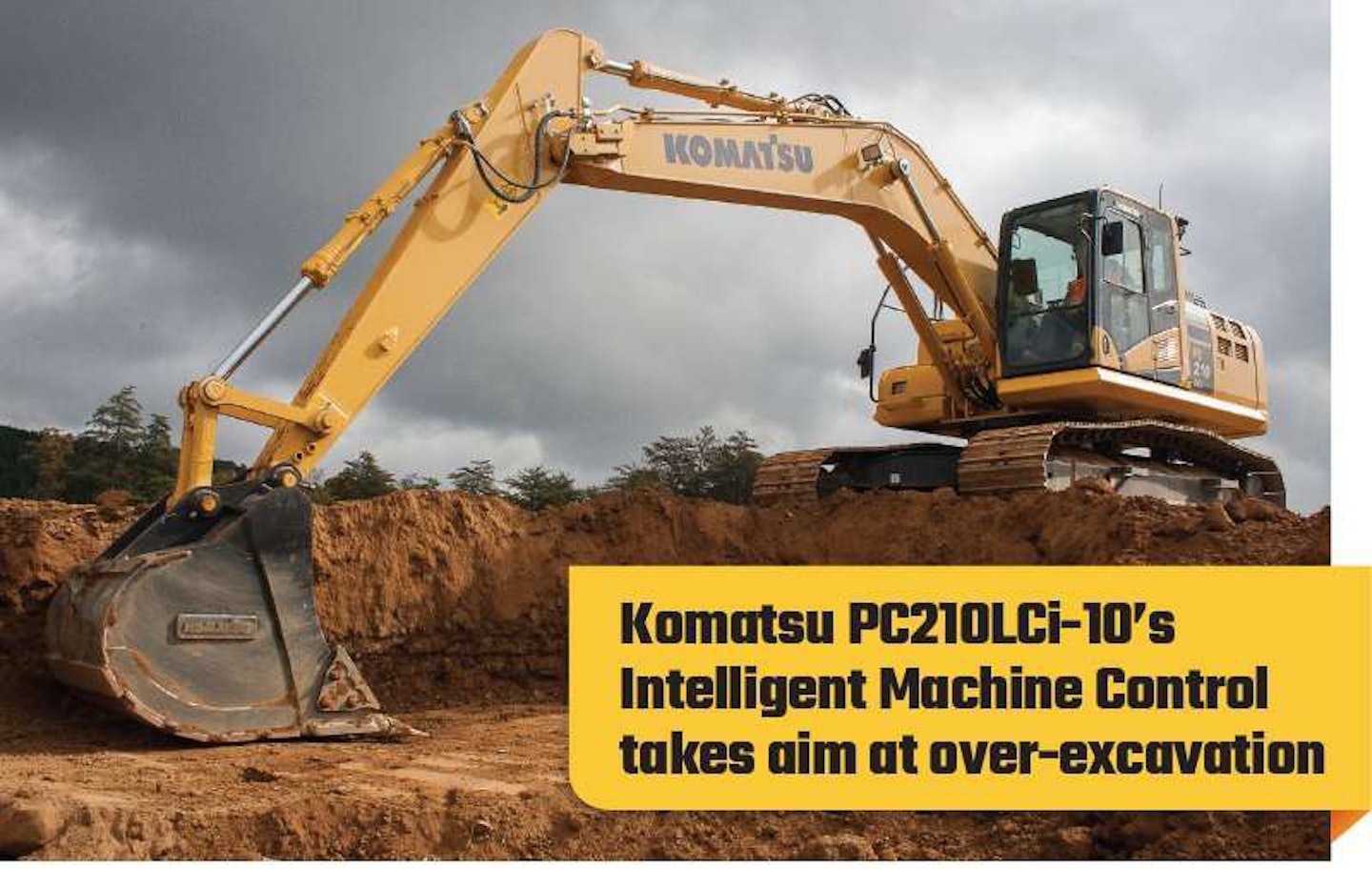 Were used to numbers some of them in the double digits when manufacturers talk about fuel efficiency gains in new equipment. But when Komatsu America introduced its PC210LCi-10 in late 2014, it talked about a huge number, and this time it didnt involve fuel efficiency, but rather construction time. Komatsu says the semi-automatic Intelligent Machine Control on its PC210LCi-10 excavator will help make over-excavation a thing of the past. And, compared with using a standard PC210LC-10 excavator, the company says in field tests the intelligent excavator showed up to a 63-percent reduction in construction time. The machine is semi-automatically limited from digging beyond the target surface, as defined by project files downloaded either through a thumb drive inserted into the bottom of the in-cab control box or remotely through project partner Topcons Sitelink 3D Enterprise program. Previewed at ConExpo in March, the excavator became available in North America last month, the culmination of a project thats obviously got those involved buzzing. This is no longer machine guidance, but machine control, says Peter Robson, Komatsus director of intelligent machine controls.

Komatsu wants to make clear the machine control takes over only when an operator nears the target surface as defined by downloaded project files. When the bucket reaches the target design surface, the automation limits it from going below grade, even allowing semi-automatic tracing of the target design surface, says Jason Anetsberger, Komatsu America project marketing manager, intelligent machine controls. In all other areas, operators are in complete control, and they can opt for manual controls at any time. The fundamental design challenge was how to smartly add automation to increase the efficiency of the machine without limiting the productivity of an experienced operator, Anetsberger explains.

Productivity gains depend on the operator, who still controls the speed of the operation. This will raise an operators efficiencies, whatever his experience. The company also wants to differentiate this system from what it calls conventional guidance systems now available for excavators. With conventional guidance, the grade quality depends on the skill of the operator, Robson says. When you talk to customers, one of the biggest problems they had with these systems is speed. The operator is always constantly monitoring the indicate-only system to see if hes on grade. With Intelligent Machine Control, the operator can focus on moving materials efficiently and with plus/minus 42-millimeter accuracy without worrying about meeting the target. This actually empowers the operator, Anetsberger adds. Hes not relying on people outside of the machine to tell him whether hes on grade, and he has less tunnel vision than if he was constantly looking at a machine guidance monitor.

The only obvious clues an intelligent machine is different from the standard PC210LC-10 are the antennas and in-cab control box. All other components are internal. These components give the excavator these semi-automatic capabilities when near the target surface.

The 7-inch standard display in most excavators wouldnt convey all the information operators needed with the Intelligent Machine System, so Komatsu opted for a 12.1-inch-high screen that uses a touch screen interface instead of a multi-step menu. (Note: the machine still uses the excavators function display monitor for regular functions.) The angle and magnification of the 3D display can be changed, allowing 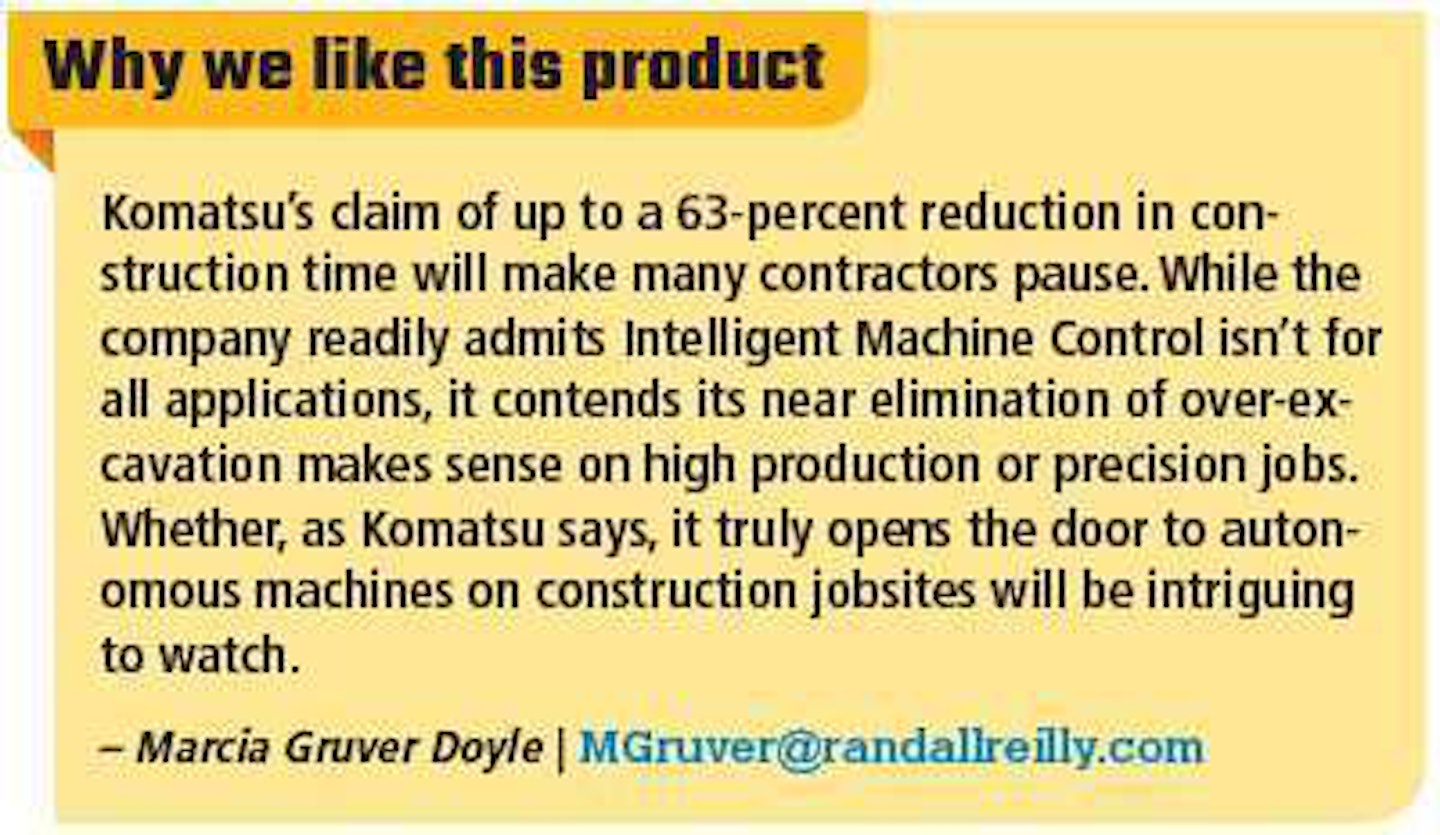 operators to select the optimum view for their jobs. Users can switch between a rough overall view and a magnified fine grading view that highlights the bucket position. The display can be moved out of the way when not in use. Located in the upper right hand corner of the screen, the arrow of the facing angle compass shows the orientation of the bucket edge relative to the target surface. This compass allows us to square the machine to the slope, basically giving the bucket an accurate cutting edge perpendicular to the slope, Anetsberger says.

While this seems easy, it can be quite difficult, especially when you consider the machine is sitting on an uneven surface. In a narrow column on the left side of the screen, a conventional colored light bar shows the bucket edge position relative to the target surface; when the buttons are green, youre close to grade. Operators can also opt to use a sound function, which audibly warns them when the bucket reaches programmed distances from the target surface. If you opt for manual controls, the Auto mode can be turned off by pushing the upper right corner switch, putting the display in indicate-only mode.

If owners opt to use Topcons Sitelink 3D Enterprise system, machine and office can be connected in several ways: Project files can be directly downloaded from a contractors office to the machine.

ROI in 18 months While not disclosing the exact number, Robson says theres a significant premium for the Intelligent Machine Control system, but says Komatsu expects users to get an ROI in 18 months. As with the dozer, where the initial D6li-23 model opened the way for several intelligent dozers, the excavator intelligent controls are scaleable, and will most likely appear in larger excavators in the next 12 to 18 months.