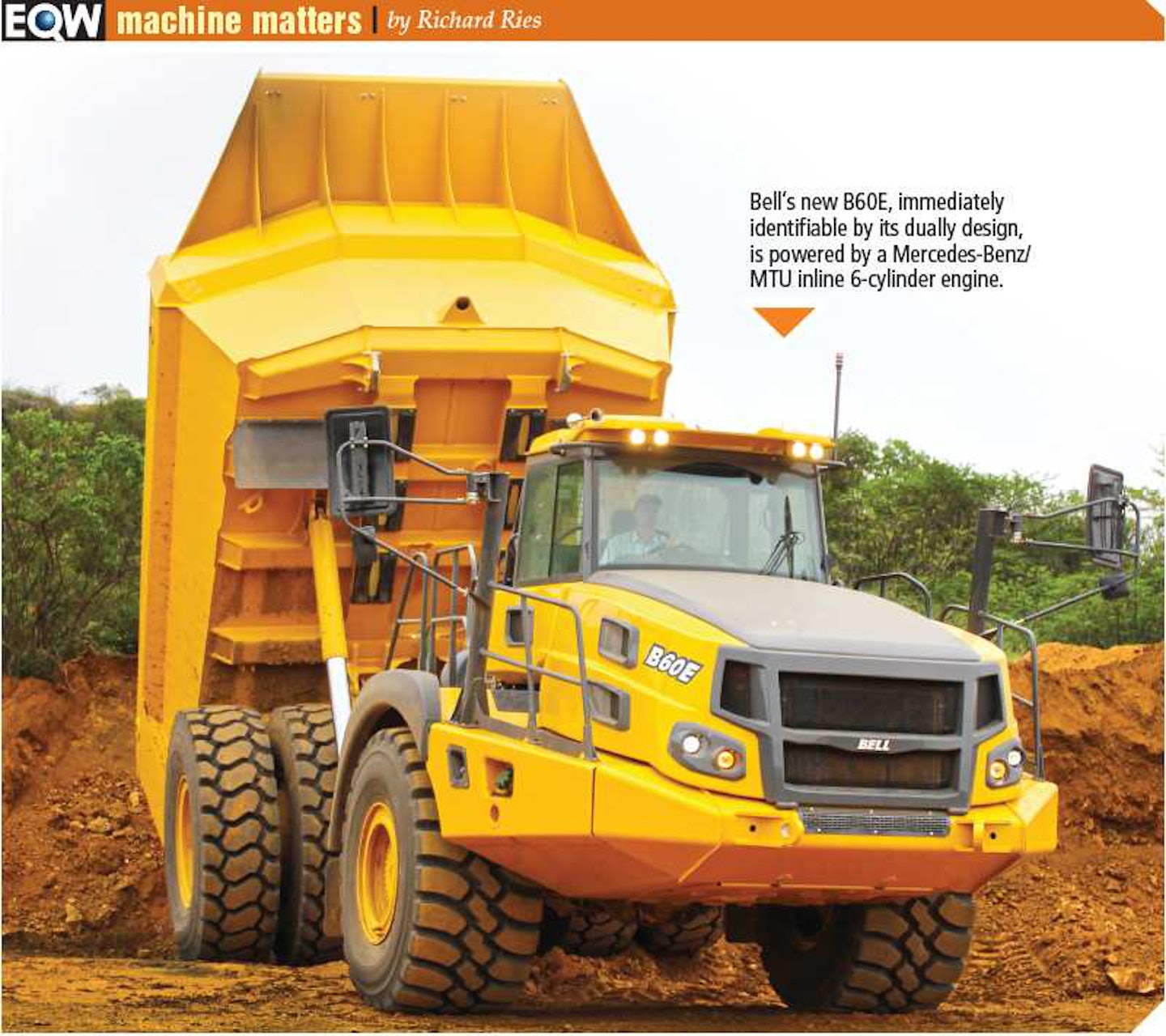 The Equipment World Spec Guide reveals the rapid progression of ADT sizes. In 2006, the smallest ADT was the JCB 714 at 14 tons, while the largest was Cats 740 at 42 tons. During that year, most models were in the 20-to-less-than-30-ton size classifications.

By 2015, the smallest truck was the John Deere 250D-II at 25.6 tons and the largest was Bells B50D at 50 tons. The 40-ton-and-over size classification also had the most models: 12. And two introductions at Bauma this year added to the heavier end of the scale: the Volvo A60H and the Bell B60E.

Growth in sizes of ADTs has been going on for at least a decade, and that trend shows no sign of abating in 2016.

The market for 60-ton ADTs is well-defined: high production, large sites with room to maneuver a 60-ton truck, and soft or unimproved underfoot conditions. In the past, these criteria would have applied to few locations, but as industrialization and development continue to spread across the world, more sites qualify. 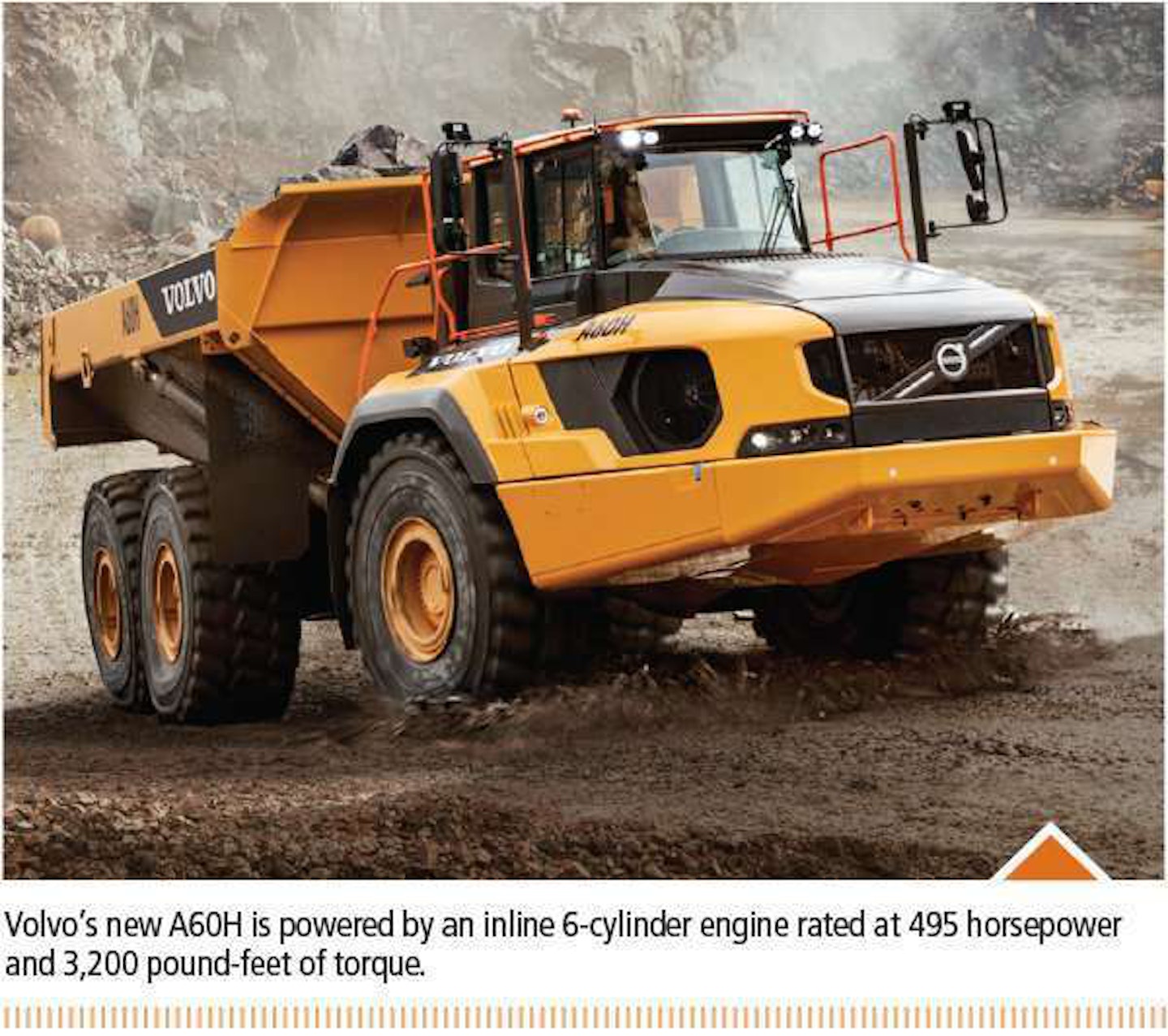 Indonesia was our target market initially, says Eric Fatyol, product manager for Volvo articulated haulers in North America. But since Bauma, where we unveiled our A60H, weve had quite a bit of interest globally. Quarries, open-pit mines, and large earthmoving operations are the best match for the A60H. Fatyol says these customers have been using smaller ADTs, such as the Volvo A40G, or rigid-frame trucks of 60 tons or larger.

Bauma was also the first showing of the Bell B60E outside of Africa. The front chassis is borrowed from Bells B50E, but the rear chassis is all new and a departure from typical ADT design. Where most ADTs have tandem rear axles and 6 x 6 drive, the B60E has a single rear axle with dual wheels, sort of a super-dually, and has 4 x 4 drive. The rationale is that 60-ton trucks are not going into truly tough environments where smaller ADTs prevail, but rather to production environments where haul roads exist. 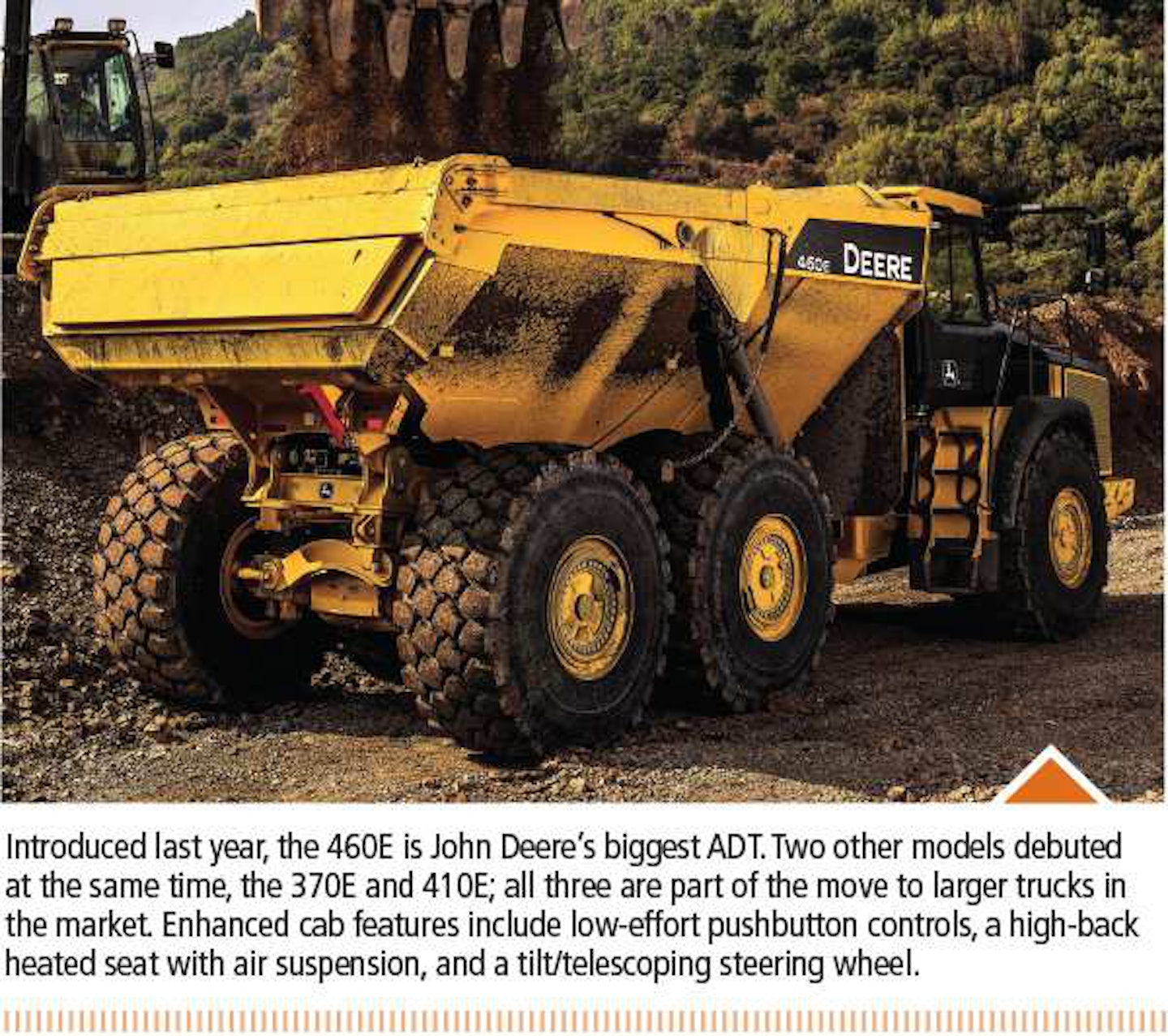 The B60E is intended for applications where 60- to 80-ton rigid frame trucks operate, but  also where rainy seasons and other conditions can bring rigid-frame trucks to a halt. Bell says if a rigid-frame truck is idled by conditions one day a week, but an ADT could run on those days, production is increased 25 percent (running five days instead of four).

Bell says the 4 x 4 design reduces tire scuffing and mechanical complexity compared to 6 x 6 drive, while articulation and oscillation preserve much of the performance associated with ADTs. In addition, the dump body on the B60E is shaped more like that of a rigid truck, more box-like with a flat bottom, which makes it easier to load with the excavators and wheel loaders already in use. The objective in creating the B60E was to preserve production in sub-optimal conditions, says Robin Pett, product manager at Bell, but with little or no change to the infrastructure or loading tools customers are currently using.

While some customers may be moving to the biggest ADTs, others are simply moving to bigger, not biggest. Those who have been using 35-ton ADTs are moving up to 40- and even 45-ton trucks during the replacement cycle. Doing so improves productivity without making other changes. Haul roads are the same. Loading tools are the same. While loading may now take five or six passes instead of three or four with a smaller truck, thats still within the window of efficient productivity, says Scott Thomas, senior articulated truck group product application specialist for North and South America at Caterpillar. 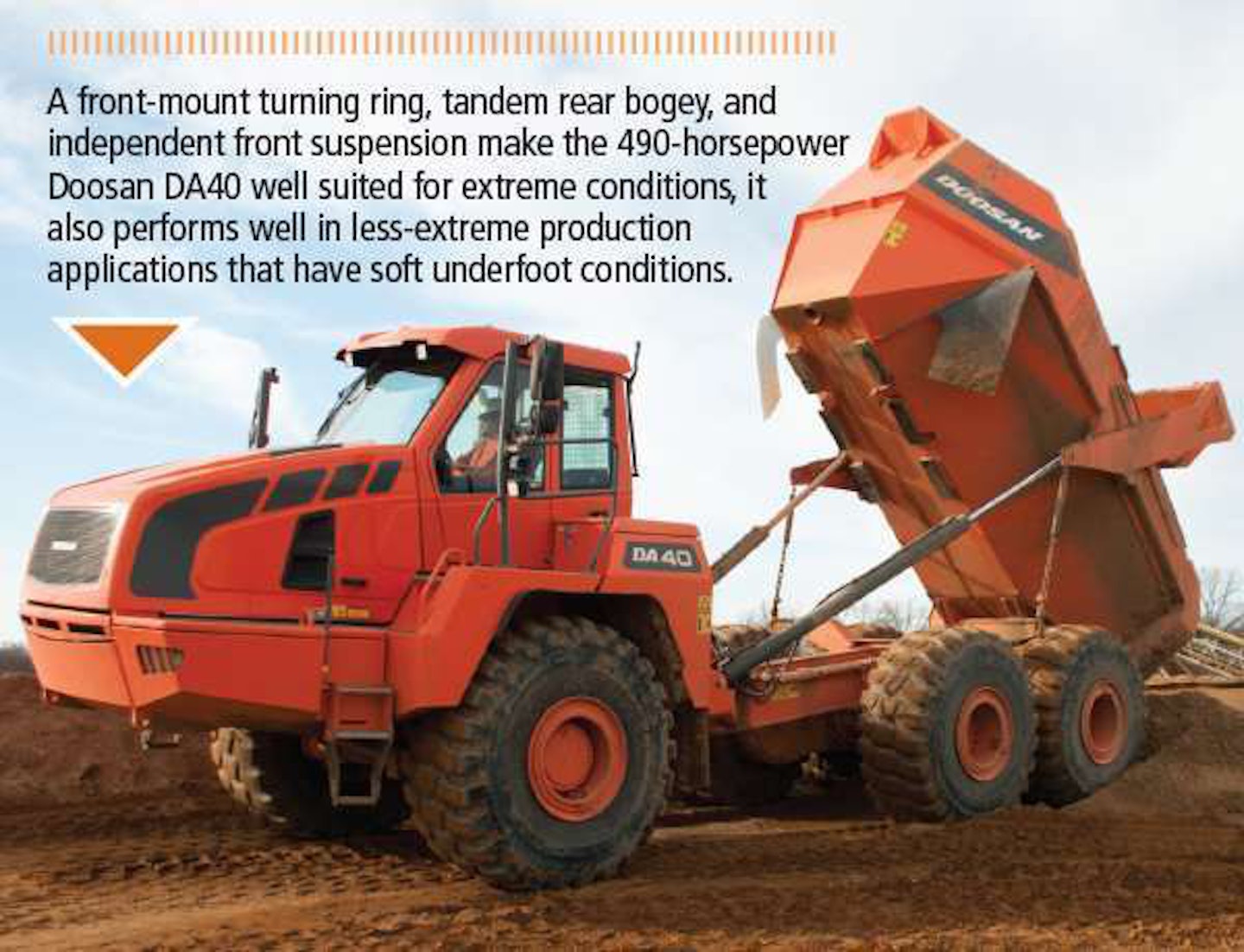 Infrastructure thats friendly to big trucks will make North America open to 60-ton trucks, says Thomas, although he expects most of those trucks will go to a site where they will remain for years, and transportability will be an issue only during infrequent moves. From Caterpillars perspective, their 45-ton 745C has all the capacity thats needed for an ADT; beyond that they offer rigid-frame off-highway trucks. There is some overlap, as their rigid-frame models start with the 770 at 40 tons.

Maryanne Graves, ADT product marketing manager at John Deere, says the escalating demand for bigger trucks was the impetus behind the development of the 460E. She says trucks of 35 tons and greater comprise 60 percent of the market, double the numbers from a decade ago, and that demand for trucks at the upper end of that scale is increasing.

Still a market for 30-ton trucks 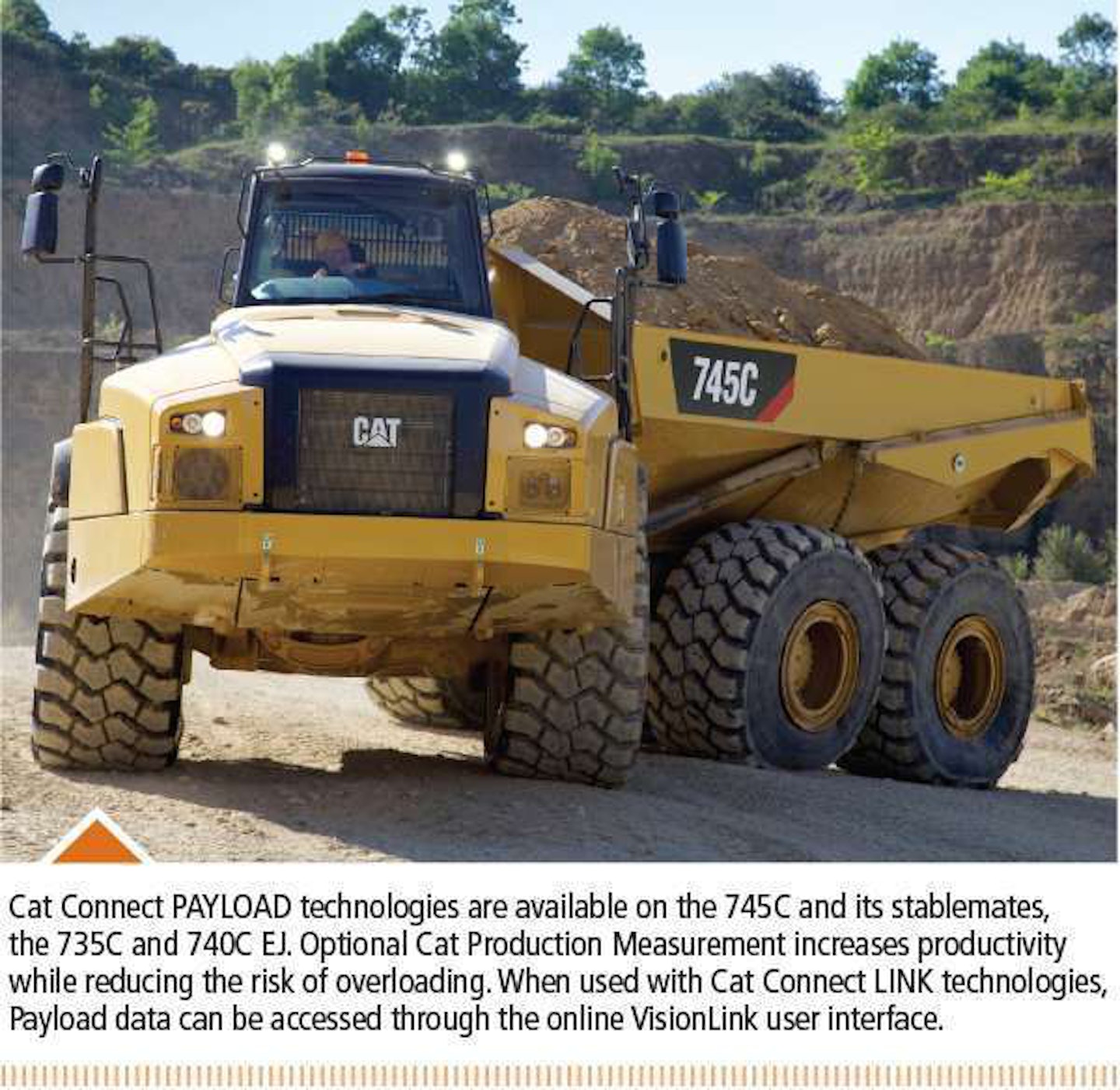 Graves agrees smaller trucks often go to rental, but she says those trucks are also popular with some buyers. Customers who purchase 26- to 30-ton ADTs specialize in jobs that favor smaller trucks; some are constrained by the level of investment required to purchase larger models.

There is a right size of truck for the jobs in a customers service area, says Graves, and owning the right size trucks is essential to profitability. A mixed fleet may not make sense because a mix of truck sizes requires a mix of loading tools and the whole thing gets financially unsustainable quickly. Better to own whatever trucks will get the highest utilization rates and rent larger or smaller equipment if and when its necessary and cost-effective to do so.

Brian Bereika, ADT product specialist with Doosan Infracore CE, says customers who move dirt for a living will have utilization rates to justify the higher owning and operating costs of larger trucks, but thats only part of the market. Customers who need 30-ton trucks will always need 30-ton trucks, Bereika says. Theyre generally not candidates for moving up to larger models.

Bereika says its ironic that an ADT may be the most expensive machine on a site, yet its operator may be one of the least-experienced, least-trained of all operators there. He says its time for on-the-job training to be replaced with structured, professional training.

Take, for instance, ADT braking practices. According to Bereika, engine braking should come first, followed by the retarder, followed by service brakes, and those only infrequently. The first two should be sufficient if youre in the right gear. Bereika says OEMs have made ADTs simpler to operate, but that may be counter-productive. Because operators dont understand the function of an ADT, they can get into trouble quickly, he says.

As for ADTs replacing rigid-frame trucks, Bereika says there are major differences that will affect return on investment. ADTs have higher acquisition costs than rigid trucks of the same capacity and lower travel speeds; both affect ROI. In addition, an ADT doing what was a rigid trucks job will accrue hours faster than a typical job. Hours pile up faster than in traditional ADT applications, and when an ADT hits 12,000 hours, its first life may be over, depending on the application, Bereika says. By comparison, rigid-frame trucks can go 15,000 or even 20,000 hours in their first life.

PM and rebuild schedules are different, too. Bereika says the design life of an ADT is shorter than that of a rigid-frame truck, but if ADTs are used on haul roads rather than the unimproved conditions of a typical ADT environment, the life cycle gap between ADTs and rigid trucks may narrow.

One of the arguments for moving up in truck size is the need for fewer trucks of larger capacity and fewer operators, thereby maintaining productivity at lower cost. But Bereika says theres a pitfall here, as well. If you have six 40-ton trucks and one is down, thats a 17 percent loss of productivity. Replace those trucks with four 60-ton models and if one goes down, productivity plummets 25 percent.

His final point is that residual value on larger ADTs seems to be weaker than for smaller trucks, when expressed as a percent of initial cost. It will take five years to get a sense of whether 60-ton trucks will hold their residual value well, he says.

Electronics have been leading the discussion of advances in machine design, but pretty much everything is getting better. While some features remain optional, technology has brought new levels of standard equipment and performance to ADTs of all sizes. Sometimes that technology is stand-alone and sometimes its integrated with electronics.

Terex Trucks (a division of Volvo) used Bauma to roll out their Generation 10 TA400. Improvements include anti-vibration mounts for the engine and cab plus improved HVAC keep operators more comfortable. An electronically-activated exhaust brake and six-stage transmission retarder improve braking performance. High-performance oil extends transmission service intervals to 6,000 hours. Magnetic pressure filters improve the cleanliness of hydraulic oil. Upgrades have been made to everything from hydraulic hoses to electrical interfaces to transmission mounts.