After teasing the new machines for the past month or so through its Twitter and Facebook pages, Bobcat today announced the launch of its M-Series 500 model skid-steer and compact track loaders.

At launch, the 500 lineup includes four new skid-steers in the S510, S530, S550, S570 and the S590, and two compact track loaders, the T550 and T590. Bobcat says the machines fall under its medium frame-size the companys most popular loader size class. Each machine packs a Tier 4 interim-compliant engine.

Three of the new machines, the S510, S550 and T550, are radius lift machines while the S530, S570, S590 and T590 feature a vertical lift path. All seven of the new machines however feature Bobcats cab-forward design which the company says improves visibility by moving operators closer to the attachment.

In its announcement, Bobcat stressed improvements to the cab and operator comfort in the 500 models. The cab door on the 500 models provides a boost to visibility and Bobcat calls the door the largest cab door opening available. This opening has increased more than 40 percent over the K-Series machines. Side and rear windows were enlarged as well and Bobcat says it redesigned and increased the total size of the pressurized cab by 10 percent. Cab height was increased too, making getting in and out of the machines easier and giving you more headroom while operating the machine.

But what about performance? By working to match each new machines size, horsepower and cubic-inch displacement to its rated operating capacity, balance and weight, Bobcat is confident that the 500 model machines are capable of outperforming higher-horsepower machines. On the 500 skid-steers, a two-speed option is available that boosts the maximum speed of the loaders from 7.4 to 11 miles per hour.

Bobcat has increased the hydraulic performance of the 500 models over the K-Series machines, engineering them for higher standard flow and pressure in order to give attachments more power. The company says a hydraulic bucket positioning option is available to reduce spillage by keeping the loader bucket level as it is raised.

Three control systems are available in the 500 models: foot pedals, Bobcats Advanced Control System or joystick controls. And like the other M-Series loaders, the 500 models feature a 5-inch color panel that allows the operator to monitor performance New job-enhancing features were added to the optional deluxe instrumentation panel.

Bobcat also worked to make maintenance points easy to access. The 500 models feature an improved cooling system that is more efficient than the K-Seires machines with a design that is easier to clean out through an oil cooler that swings up.

Other design choices were made to make sure particluar parts of the machines need maintenance less often. The auxiliary hydraulic quick couplers on the 500 models are mounted to lift arms front plate, which Bobcat says provided a sturdier mouning surface. Hydraulic hoses in the 500 models are protected by being routed through the loader arms and a guard bar protects coupler.

Be sure to check out the Quick Specs sheet below. Give it a click to enlarge. 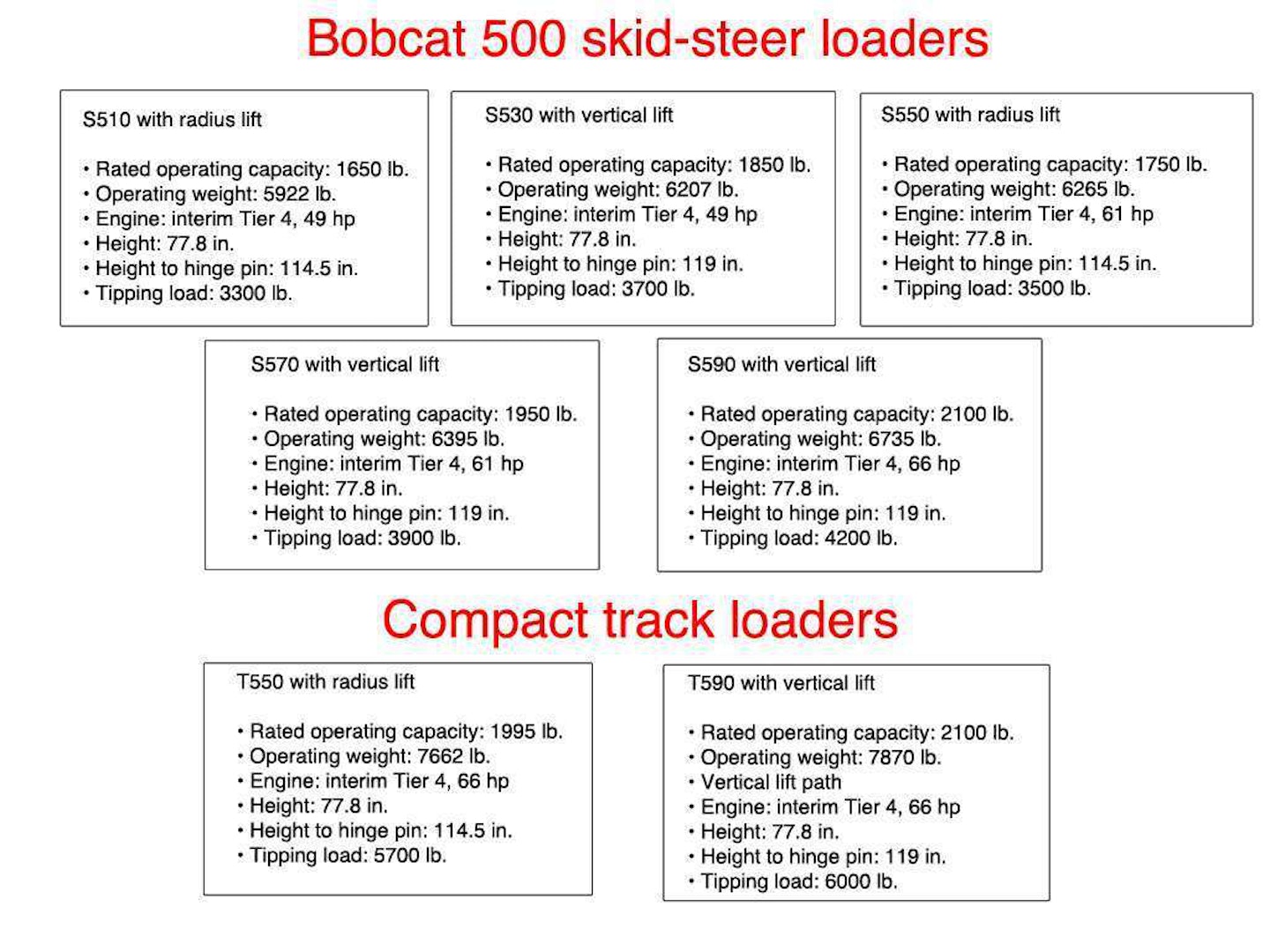