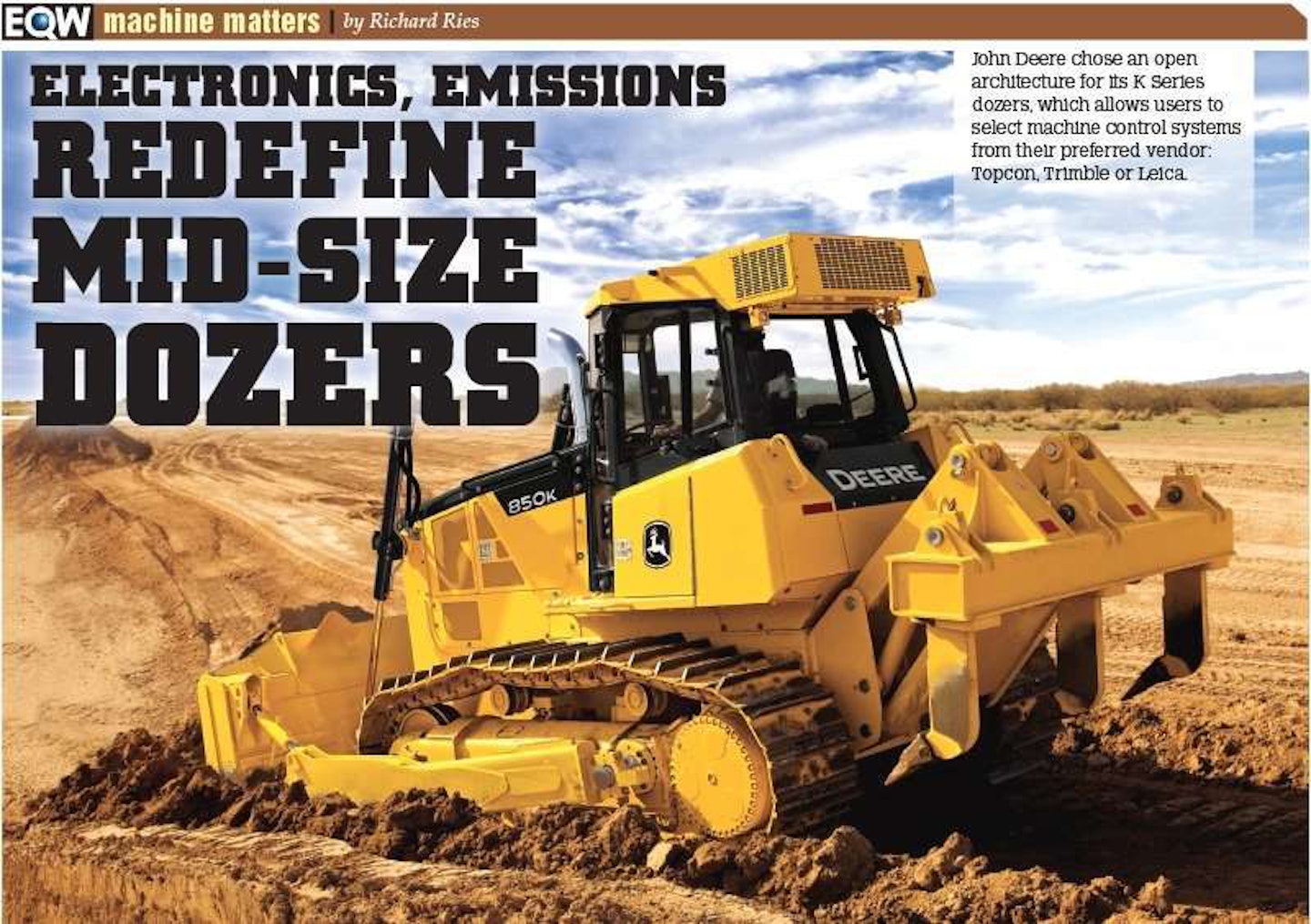 But mid-size dozers duty cycles vary considerably as do their power requirements. If the dozer is always producing the same power, its always using the same volume of fuel. If you reduce power during less demanding applications, youll reduce fuel consumption. The trick is to reduce power with no loss of performance. Electronics make this possible.

A reduced-power Eco mode a term common among several manufacturers reduces engine speed from, for example, 2,000 rpms down to 1,800 rpms. And while electronics are controlling the engine speed, theyre also controlling and balancing it with the hydraulic system. Need full power? Youve got it. After the demand is met, though, the system returns back to Eco mode.

GNSS, or Global Navigation Satellite System, has been making steady inroads into machine performance. (The U.S. system is GPS, but since many machines are also compatible with Russias GLONASS system, manufacturers are using the generic GNSS instead.)

The use of base stations and reference networks has made high-precision GNSS signals widely available. The challenge for dozer manufacturers has been to settle on a system to use those signals. There are three primary suppliers of GNSS systems and components Leica, Topcon and Trimble and they are not compatible (although conversion is possible with aftermarket products).

Some dozer OEMs work with one of the big three GNSS companies to develop proprietary machine control systems. Some offer one of the big three systems installed from the factory. Others offer pre-wiring for a specific system so installation of that system at the customers facility is a plug-and-play proposition.

Regardless of the approach taken, machine control is better integrated into dozer design, so overall performance and efficiency is improved. While theres minimal impact on some features, such as geofencing (restricting operation to within defined boundaries), there are significant gains in dozing operations.

Tier 4 Final regulations went into effect for engines greater than 174 horsepower January 1 of this year. Tier 4 Final for engines just below that go into effect January 1, 2015. So all dozers discussed here, which are 130 to 330 horsepower, are under Tier 4 Final or soon will be. Common strategies for compliance include the use of cooled exhaust gas recirculation (CEGR), a diesel oxidative catalyst (DOC), a diesel particulate filter (DPF), selective catalytic reduction (SCR) or some combination of these, and the approach chosen by an OEM may vary depending on the size of the equipment and its intended use. Engines using SCR require the use of diesel exhaust fluid (DEF) and those using DPFs require regeneration; you need to adjust your operating and service practices accordingly.

Here are some of the highlights from several mid-size dozer manufacturers.

Compared to the closest comparable previous Case model, the 2050M offers an 11 percent improvement in fuel efficiency (measured in cubic yards of material moved per gallon of fuel) and as much as 17 percent greater productivity (measured in yards per hour). And Case says the 1650M offers best-in-class drawbar pull of 61,200 pounds.

Each M Series dozer is compatible with blade control technologies from any of the major GNSS suppliers, but Case recently signed a development/partnership agreement with Leica and future models will be optimized for use with factory-installed Leica systems.

Case Extended Life Tracks (CELT) are available as optional equipment. The CELT design uses two coaxial bushings, the outer one rotating when in contact with the sprocket to dramatically reduce wear. Service life can be up to twice that of standard tracks.

Enhanced AutoShift on the D6T (207 horsepower) and D8T (310 horsepower) effectively provides a 3-, 6- or 9-speed transmission. The box itself has three gears; the multiplier effect comes from electronically-controlled engine speeds. In 6-speed mode each gear can be run with the engine at half speed or full speed. In 9-speed mode the engine speed options are half, three-quarters and full. (Relative engine speeds are rounded off for simplicity.) The results are a much wider range of operating characteristics, better productivity, and improved fuel efficiency.

The Cat Clean Emissions Module includes the Cat Regen System burner to preheat the aftertreatment system to improve its performance and also reduces regeneration time. DEF consumption is around 2 percent of fuel consumption. Cats Tier 4 Final tractors have up to 10 percent lower total fluid consumption (DEF plus fuel) than their predecessors (counting fuel only, since those models did not require DEF).

Productivity enhancements on the D8T include Auto-Carry, which maintains a full blade, and Auto-Rip, which adjusts ripper shank depth. Both rely on sensors that detect load and measure track slip.

Sam Meeker, product application specialist, emphasizes that Cat offers multiple levels of technology. All our tractors come Grade Control-ready for easier installation of aftermarket blade control, he says. Technology options start with Stable Blade. From there we go to AccuGrade Laser, AccuGrade GPS, and finally to Cat Grade Control 3D. The point is to have performance characteristics and costs to meet varying customer requirements.

The 205-horsepower 850K, launched in 2011, was the platform for changes that carried over to other dozers the next year, including the 750K (165 horsepower; 155 horsepower XLT model). K Series machines have CEGR with DPF aftertreatment. A hydraulically-driven fan runs only as needed to conserve fuel and reduce noise. Other noise-reduction techniques include sound damping in the cab and viscous cab mounts; noise levels at the operators ear in the 850K are reduced 45 percent compared to the previous model. Transmissions are hydrostatic. Deeres Total Machine Control system allows operator to tailor performance characteristics to suit their needs.

K Series dozers can be ordered with machine control systems from Leica, Topcon or Trimble installed from the factory. Or they can be ordered pre-configured for machine control systems from any one of those three providers. We chose an open architecture because we knew customers had strong preferences for machine control systems, says Mark Oliver, product marketing manager for crawler dozers. They may want to stay consistent with other machines in their fleet or they may simply have a loyalty to a dealer for one of those brands. Our approach provides a setup that is configured for seamless integration with whichever brand they prefer.

The 6068H engine used in the 750K and 850K allows operation on slopes up to 45 degrees while maintaining adequate oil flow to prevent damage.

New to the lineup are the D51EXi-22 (130 horsepower, standard track), D51PXi-22 (130 horsepower, low ground pressure/LGP), D61EXi-23 (155 horsepower, standard track) and D61PXi-23 (168 horsepower, LGP). The i in the model name indicates a model with Komatsus Intelligent Machine Control technology, which is installed by Komatsu at the factory and serviced by Komatsu distributors. Compared against machines with add-on 3D machine control systems, Komatsu says the D51-22 and D61i-23 with Intelligent Machine Control provide improvements in dozing efficiency of 9 and 13 percent, respectively. This is achieved through automatic control of the blade during both rough and finish dozing combined with minimizing track slip by monitoring blade load.

Both models have three user-selectable load settings plus four dozing modes to tailor machine performance to the application: cut, cut and carry, spreading and simple grading. All directional movements and the dual-path hydrostatic transmissions are controlled with Komatsus Palm Command Control System joystick.

The PR 736 (201 horsepower) will soon replace the PR 734. Tier 4 Final compliance is achieved with the use of an SCR. According to Robert Klima, Liebherrs product manager of crawler tractors, SCR has lower operating costs than using a DPF, is simpler to maintain, and does not require the regeneration cycle of DPF systems. While SCR requires the use of DEF, topping off the DEF tank typically occurs during refueling.

With a displacement of 7.0 liters, the inline 4-cylinder engine on the PR 736 is larger than many inline 6-cylinders engines found in other dozers of this size. The intent is to provide excellent power and performance along with gains in fuel efficiency. In heavy dozing applications, the PR 736 has an up to 6 percent increase in fuel efficiency over the PR 734. Even greater fuel savings can be had under light and medium loads when using the ECO mode. The hydrostatic travel pumps and motors are carried over from the PR 734 but the electronic controls are all new.

A seat switch replaces the safety levers of previous designs. A delay allows the operator to rise and check the blade while the dozer continues to operate normally. Once in safety mode the machine can idle but all hydraulic circuits are inactive.

Like all Liebherr Generation 6 dozers, the PR 736 is compatible with blade control systems from all major suppliers and can be ordered GNSS-ready for the system of the customers choosing.