Deere says the machines now boast many of the same features as the larger 850K and 1050K.

The first of these updates is a move to Tier 4 Final PowerTech engines for the machines. The 550K and 650K are now powered by 4.5-liter power plant pushing 92 horsepower and 104 hp, respectively. The 700K is powered by a 6.8-liter engine 130 hpa 5 hp boost over its predecessor.

RELATED >>John Deere details development of the 1050K, its largest dozer yet, in walkaround (PHOTOS)

As part of the engine upgrade, the machines now benefit from Deere’s Eco Mode which adjusts engine speed and transmission settings based on the load the machine is under. Deere says the mode can save up to 20 percent in fuel consumption without loss in productivity in many applications.

As for the machines’ hydrostatic transmissions, Deere made updates to theelectronic control system for improved response and upgraded the motors from a two-speed design to a variable displacement design to optimize pushing power and drawbar pull.

Operators will noticeupdates to the dozers’ hydraulics, including a larger pump for both the standard mechanical controls anda new option, electro-hydraulic (EH) controls. Deere says the EH control is more responsive to the operator, adding that the feature providesa “significant” improvement to grading while using a grade control system versus mechanical control.

Speaking of, if you order one of the machines with the EH control, it comes ready to accept the installation of the grade control system of your choice. However, Topcon users can have the system installed at the factory and are able to finance the system with the machine. 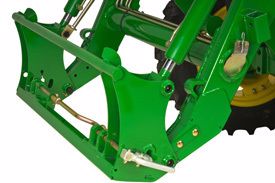