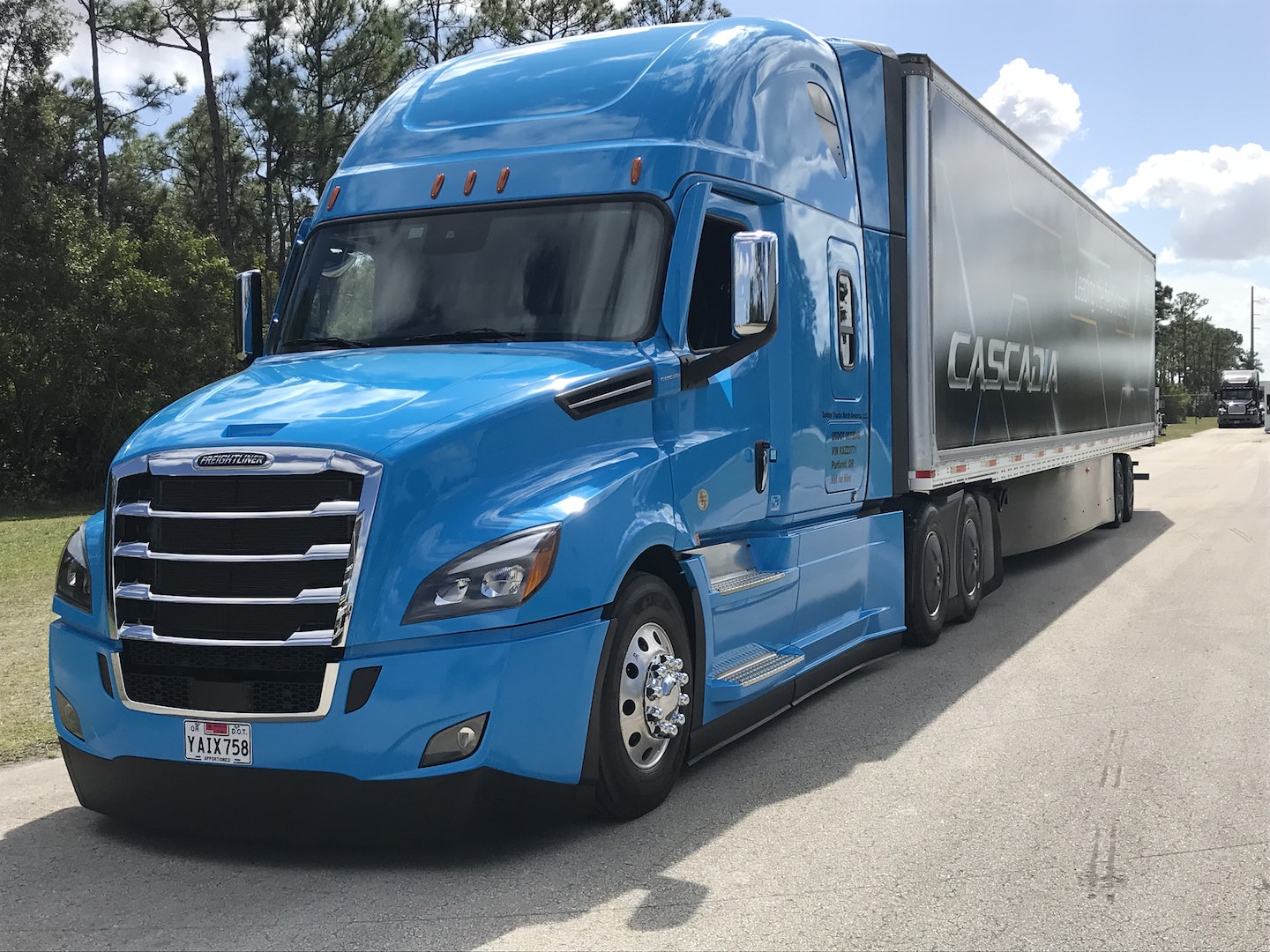 Last year was a record-breaker for Daimler Trucks North America (DTNA) as the truck maker closed 2018 with a best-ever retail sales mark of 175,950 units.

Riding what DTNA Senior Vice President of Sales and Marketing Richard Howard calls massive momentum, 2019 came out of the gate hot. Build slots for this year are already filled and cancellation rates are 1.5 percent about half of their normal rate, Howard says. The Freightliner brand hit 48 percent marketshare in U.S. Class 8 truck sales in January on the strength of Cascadia the Freightliner flagship long-haul truck that got a tech and aero-rich overhaul barely two years ago, and will get another one for the 2020 model year.

Next generation Cascadia tractors, set for production this Fall, will enable SAE Level 2 automated driving and will become the first production model to hold such distinction in North America. Level 2 automation means the truck can accelerate, decelerate and steer independently. I was able to experience all those newly automated functions on a test drive between West Palm Beach and Fort Pierce, Fla., last week.

According to the National Highway Traffic Safety Administration (NHTSA), 94 percent of crashes are caused by human error. Over the past 120-plus years, Daimler has been awarded more than 100,000 patents for safety. The goal, Howard says, is to be 100 percent accident-free, and adding a technology layer of driver support to Cascadia is a step in that direction.

The brains of the operation 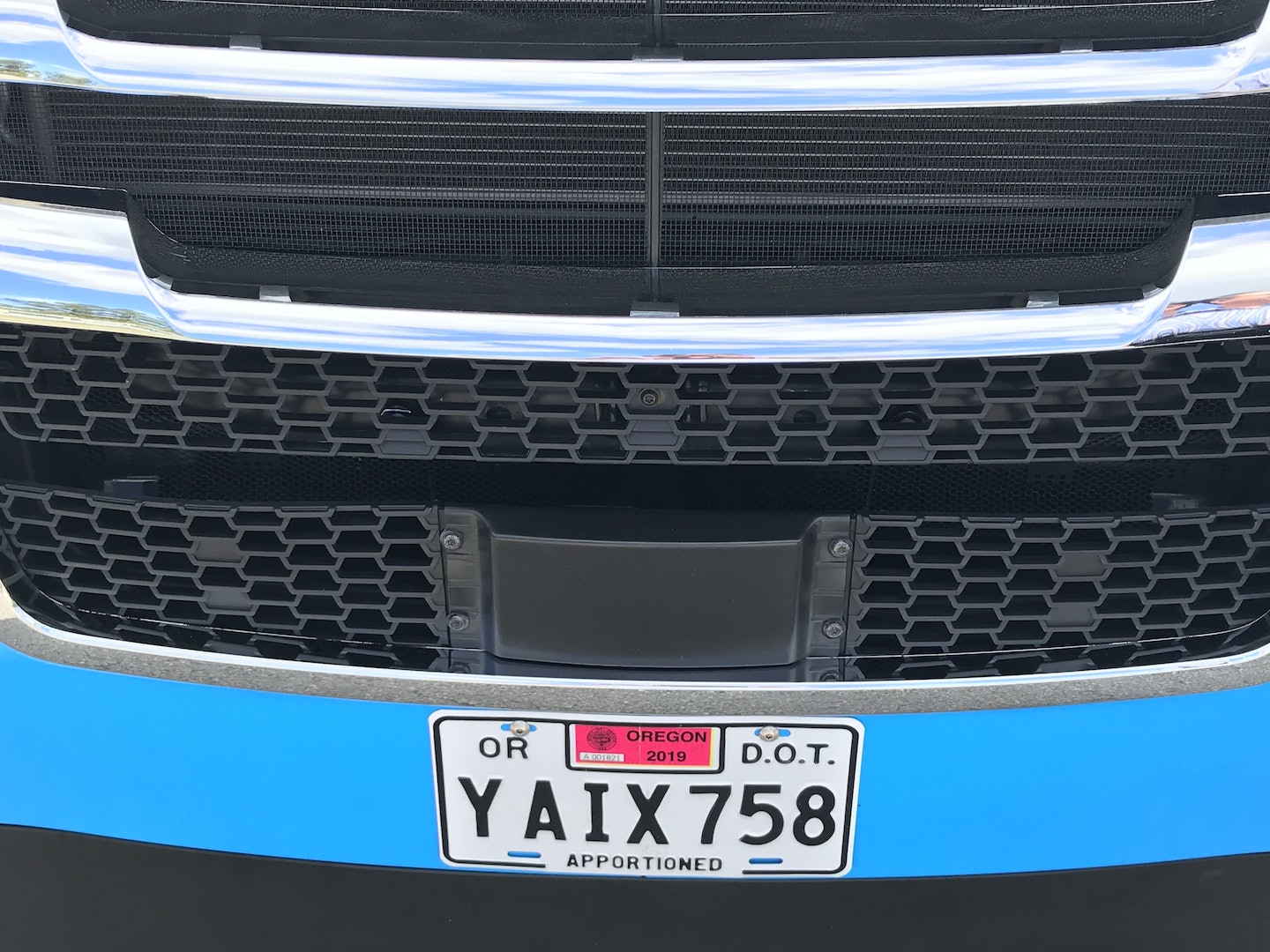 When Detroit Assurance debuted in 2014, take rates for the platform were just south of 30 percent. That hit 75 percent last year, driven largely by the safety features it provides.

Detroit Assurance 2.0 and 4.0 were strictly radar-based, which provided collision mitigation and adaptive cruise control capabilities. The 5.0 version marries the bumper-mounted radar with a new high-definition (HD) camera affixed atop the windshield to provide improved object recognition.

The system tracks up to 40 objects at a range of about 800 feet with the radar prioritizing six objects, and leaving the camera to hone in on four. The data feed refreshes, Daniels says, about 200 times per second.

In low-visibility conditions, like fog, the system relies more heavily on the radar rather than simply suspending functionality. The HD camera controls safety functions like lane departure warning while also handling sign recognition, another new feature. Speed limits are shown in the driver information display (DID) and update as the camera recognizes they have changed. The camera can also recognize passing zone signs and truck route warnings.

Through the updated Detroit Assurance 5.0, ACC now brakes to 0 mph and Active Brake Assist 5.0 standard within Detroit Assurance 5.0 suite includes full braking on moving and stationary objects. Daniels says the systems camera looks for hip movements from pedestrians rather than arm motion because walkers are often distracted by the mobile device theyre holding to their face.

ACC to 0 allows the driver to keep cruise control enabled in congested conditions as the truck creeps along with the pace of traffic, including fully stopping the vehicle when the need arises. If the truck rests at a stop for more than two seconds, the driver will have the launch the vehicle a safety feature baked in, Daniels says, to prevent injuries to pedestrians who seize the opportunity to dash in front of the stopped truck. Detroit Assurance will hold the brake on the truck. To re-enable ACC, the driver only needs to hit the set/resume button.

I used the ACC to 0 feature as we exited the highway for a truck stop in Fort Pierce. The car in front of me slowed as we both pulled off toward truck parking and then it hit the brakes (and stopped) as we approached the passenger car lot. The truck slowed itself from 65 mph to 0, pacing the car at a safe distance the entire time before coming to a complete stop.

Driving without actually driving (kind of)

Active Lane Assist is the system that enables Level 2 automated steering. It consists of Lane Keep Assist (LKA) and Lane Departure Protection (LDP). When a driver switches on ACC, the system automatically engages LKA, which uses small steering gear movements to keep the truck centered in its lane. The driver can also allow for a slightly left or right bias. With LDP, if the truck drifts without the turn signal engaged, the system will counter-steer the tractor back into its lane and give the driver audible and visual warnings.

While the automated steering will do its best to keep the truck centered, it will cede control to the driver. If the platform thinks the truck should be centered but the driver decides it needs to move to the left or right maybe to give a construction crew some breathing room, for example the system doesnt fight the driver. The truck simply moves over as it traditionally would. Active braking works the same way, always letting the driver make the final call.

The system always assumes the driver has a good reason for doing it, Daniels says, and the final decision always lies with the driver.

When highway lane markings were well-defined, Active Lane Assist worked flawlessly. Wheel input from the system was subtle and precise. I cruised along for long stretches with my feet firmly planted to the floor and hands only resting on the wheel.

I enjoyed using this feature and can see the benefits of having the automated support over 400, 500 or 600 miles per day, hauling freight several days per week.

Detroit Assurance 5.0 is a driver assistance platform, not a driver replacement system. As such, it requires that the driver remain actively engaged at all times. Sensors in the steering wheel detect if a driver has taken their hands off the wheel and offer a series of audible warnings in escalating annoyance as a reminder to put your hands back on the wheel. If the driver ignores the persistent screeching requests to grab the wheel, LKA will disable. Lane Departure Protection remains enabled in order to keep the tractor within its lane, but it will bounce from right line to left line in an effort to re-engage the driver.

There were times the camera struggled to find and keep its lane position, but those were mostly limited to stretches of road with poor, faded or no clear lane markings. Again, this isnt a self-driving truck and its important for the driver to be alert at all times because its not overtly obvious when the system no longer recognizes lane markers. State highways, fraught with poor lane markings and intersections, were the site of most of the system interruptions and the platform wasnt really designed for that environment anyway. Sure, it will work more often than not but Level 2 driving is the domain of the open road, not a two lane highway with stop lights every 300 yards. And while LKA and LDP were challenged here, ACC to 0 never skipped a beat. It was an excellent traffic fighter.

Side Guard Assist, consisting of two short range radar sensors that monitor the right side of the unit to the rear of the trailer, is a suite of handy companion options designed to prevent collisions. Lane Change Assist and Turn Assist each detect objects along the passenger side blind spot and offer warnings if the driver initiates a lane change. Trailer Sweep Assist alerts the driver that the trailer has off-tracked to the extent that its about to hit a stationary object, like a sign or pole.

Lane Change Assist and Turn Assist are handy little features borrowed from the passenger car segment. When the system detects an object on the passenger side, a yellow signal is displayed in the right-side pillar and in the DID. If the driver drifts to the right, or switches on the blinker for a right-side lane change, the display changes to red and you get an audible warning. It seems like a little thing, but its a nice sentinel-layer of added blind spot protection.

Other new standard features for the 2020 model year include automatic wipers and smart headlamps with intelligent high beam.

When set to the auto position, a sensor in the windshield turns the wipers on when moisture is detected. The system will maintain interval or continuous wiping as long as the precipitation continues and switch itself off when theyre no longer needed.

A sensor in the windshield recognizes poor visibility conditions including dusk and low-light and switches on the headlamps. The system turns them off when visibility improves. The intelligent high beam system uses the HD camera to scan the horizon for oncoming headlights and looks ahead for brake lights, switching between high and low beams as needed.

Aerodynamic enhancements for next model year include a standard A-pillar deflector that helps slide air more smoothly down the side of the tractor. This also helps keep rain and road grime off the side windows. New tow hook covers improve airflow by reducing the volume of air entering the front of the truck and directing it down the cab. A 167 cc compressor is being replaced by a 156 cc compressor to improve operational efficiency.

Aerodynamic Height Control, an industry first optional upfit, electronically lowers suspension height one-inch automatically at 55 mph to optimize airflow over and under the front of the truck to reduce drag and raises the vehicle to its original ride-height at 45 mph.

I wasnt sure how I would feel about the truck changing ride height at-speed but its not even noticeable from the drivers seat. If not for the message fed to the DID, I wouldnt even have known it was happening. It can be disabled by a switch on the dash if the driver so chooses.

Other enhancements include limited-time exclusive availability of Michelins X Line D+ Energy tires, which the two companies developed in collaboration to reduce rolling resistance in 64 applications, and a low ground clearance bumper.

The 2020 Cascadia is a fascinating demonstration of technology wrapped in an exterior that looks amazingly like a semi. Thats noteworthy recently considering that the more innovative the trucking technology, the less it seems to look like a truck.

Freightliners autonomous-friendly Cascadia isnt going to slash any driving jobs. For example, we missed an Interstate on-ramp on our drive and had to execute a tight about-face on a four-lane highway. Detroit Assurance 5.0 wasnt riding to my rescue there. That was all on me. But what it can do is give the driver a little added support by taking over many of the small things that add up to big things over the course of an 11 hour day, while also constantly standing watch over the trucks surroundings. The 2020 Cascadia wont turn a bad driver into a good one but it gives great drivers an unobtrusive co-pilot, making them even better without extra work on their part.

Becoming 100 percent accident-free isnt going to be 100 percent human free for a long time but with the new Cascadia, Freightliner has taken a major leap and an impressive step in that journey. 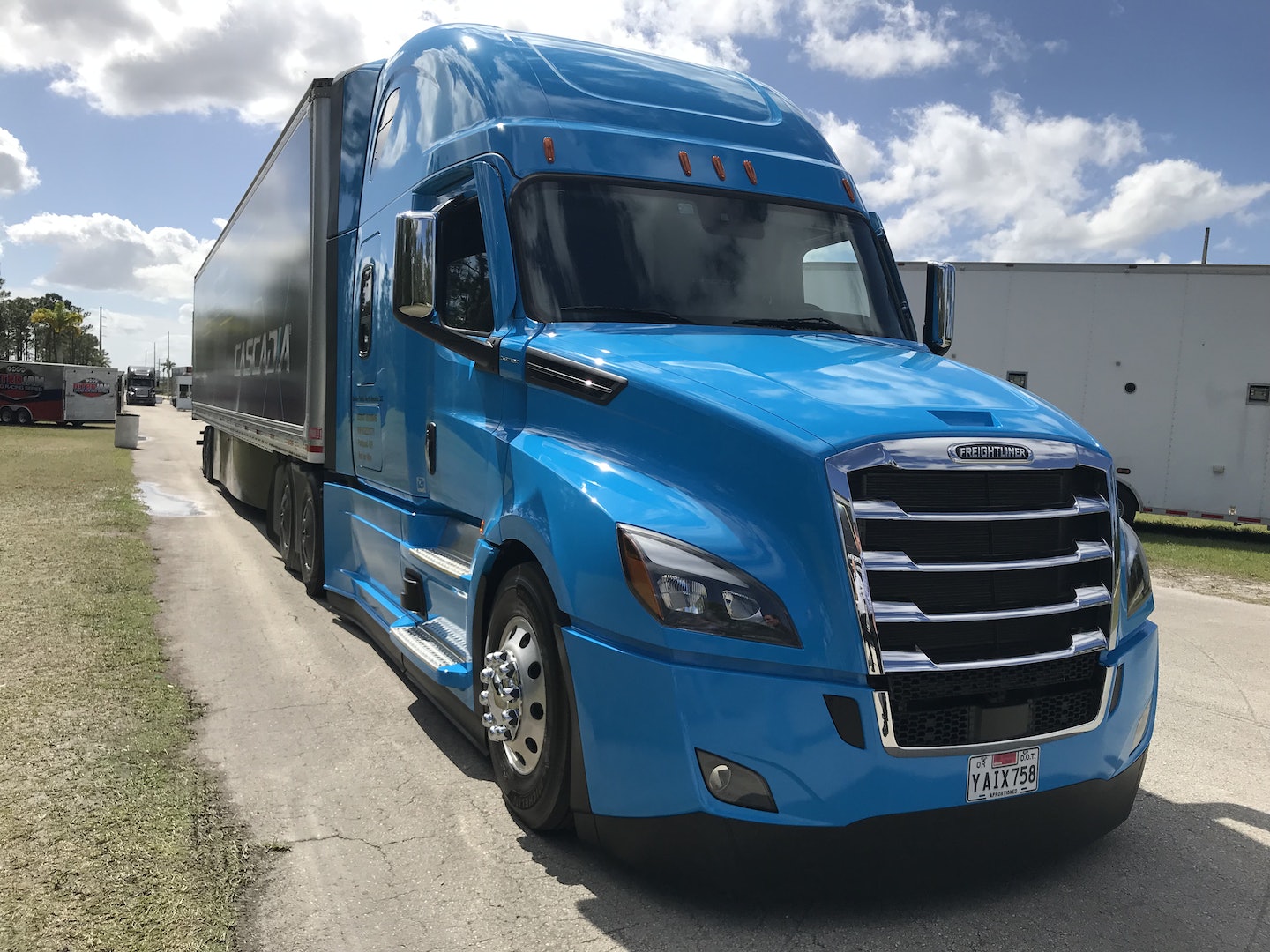