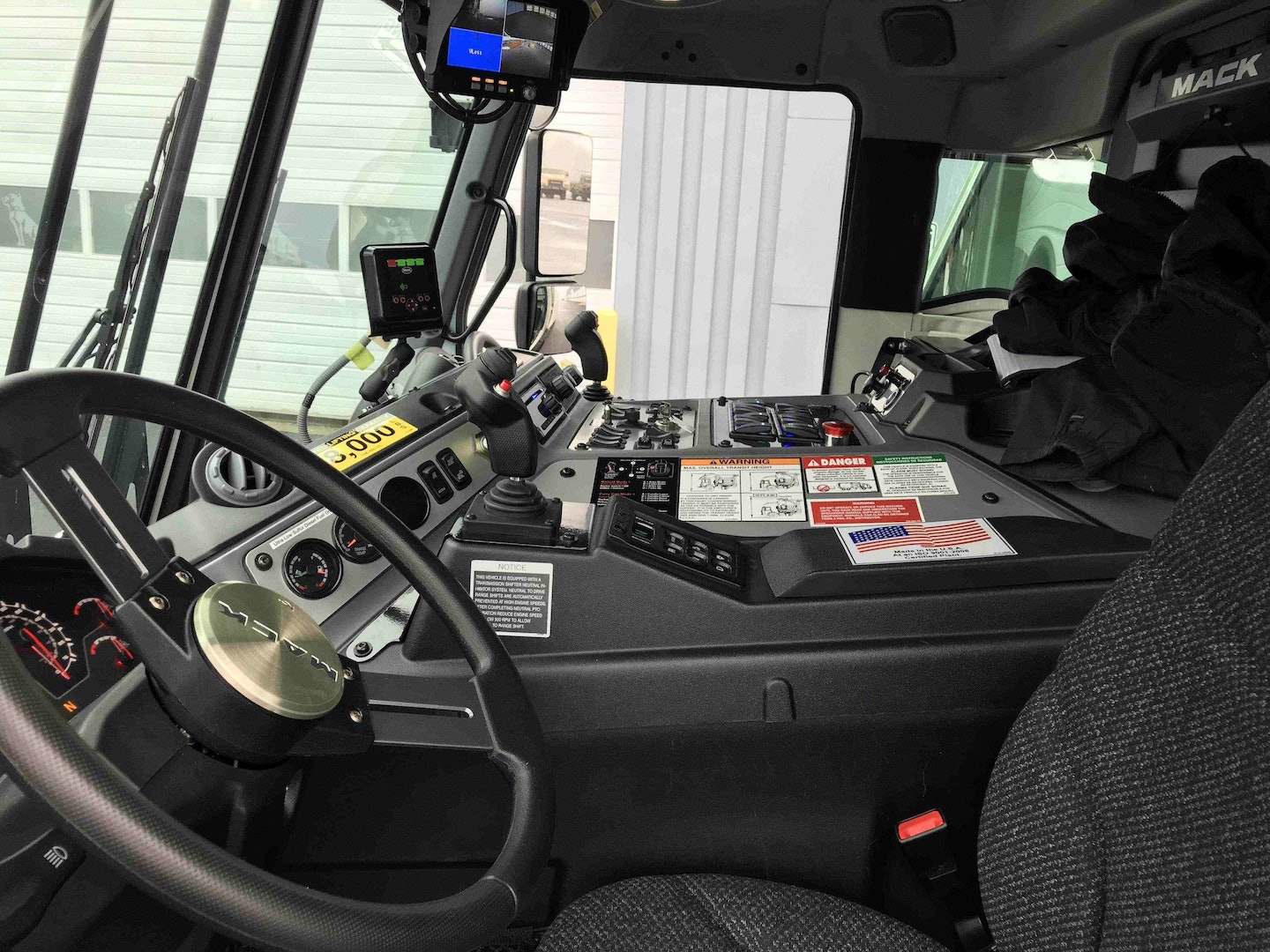 Launched in 2015 as a replacement for Macks TerraPro LEU, the LR model features several driver comfort and safety feature updates.

When your job is to grind out a trash route day-in and day-out, little things can go a long way.

A new drip rail above the door keeps the rain out of the cab when the door is opened upwards of 1,000 times a day.

A tilt and telescoping steering column comes standard and features column-mounted gauge pods for both the right-hand and left-hand driving positions. With the cluster mounted to the wheel, the driver is presented with excellent visibility regardless of the wheels position.

I was able to position the wheel to allow my elbows to rest on the door and the console, which should make eight to 10 hours on a trash route feel less taxing on the drivers arms.

A massive front windshield and giant side windows provide ample visibility, which improves safety for a truck that operates so close to the curb and within close proximity to people. B-pillar windows offer the convenience of over-the-shoulder glances when working the truck through traffic.

The LR features a 45 degree wheel cut, allowing it to navigate a cul de sac without having to back up. With reduced visibility at the rear, backing up is when most injuries and accidents happen.

Trash collection is one of the most dangerous jobs in the U.S. According to the Bureau of Labor Statistics, the fatal injury rate for trash collectors is 33 per 100,000 incidents, putting trash collection ahead of law enforcement, construction worker and miner on the danger scale.

The LR gets an LED makeover inside and out. The only lights on the truck that arent LED are the headlamps, and an LED option is available.

Power windows and locks come standard on the LR and the trucks side mirrors can electronically store two positions a handy feature for trucks configured for both left- and right-side driving. The driver can simply flip a switch and the mirrors will re-adjust themselves to a pre-programmed position. Dual-side drive units feature a steering wheel, gauge cluster and pedals on each side and the driver can switch between them via a toggle switch as long as the trucks parking brake is activated. 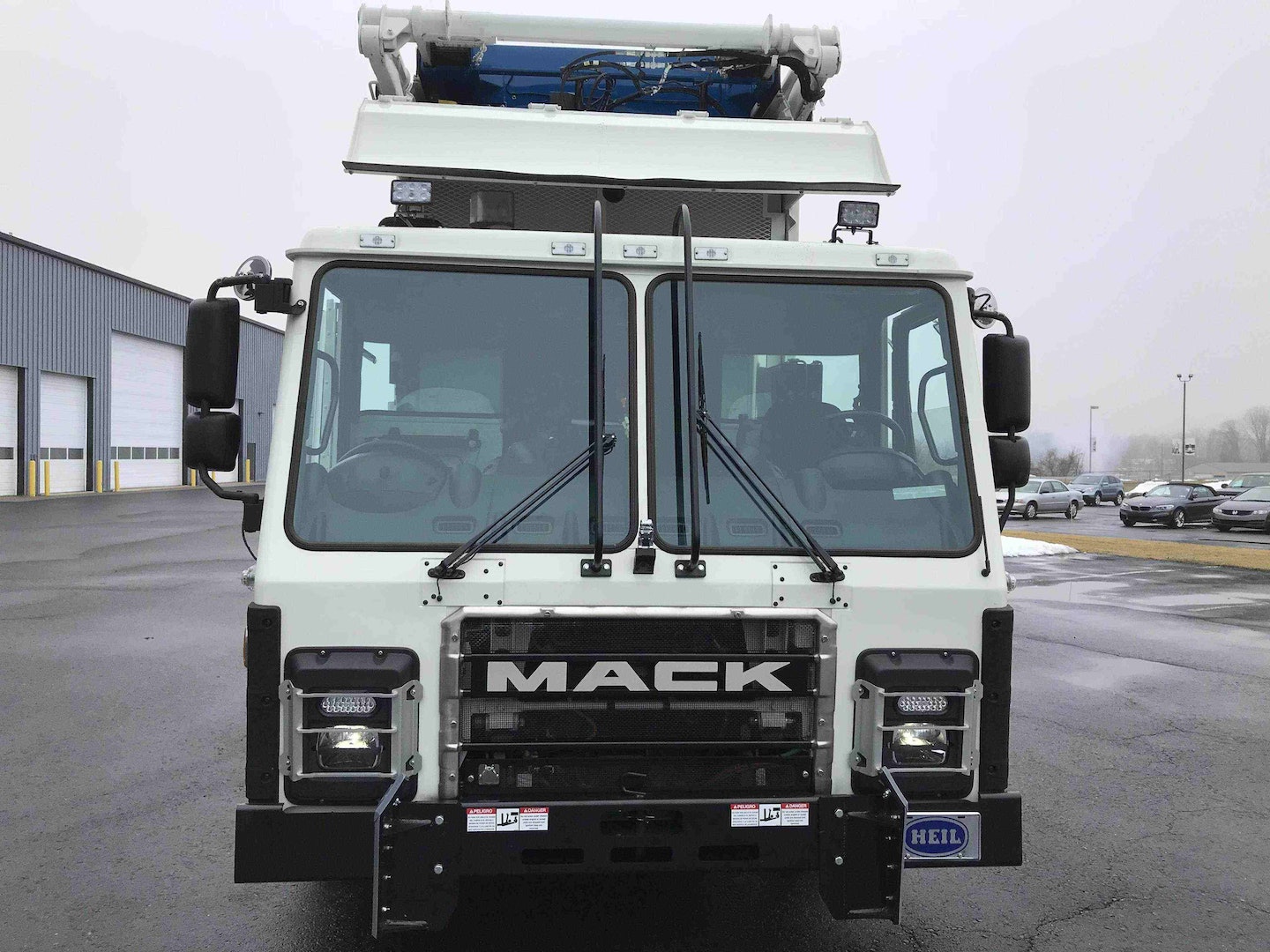 Macks Refuse Product Marketing Manager Curtis Dorwart says demand for trucks equipped with right-hand drive capabilities is increasing because it allows one operators to drive and collect and dump cans from the same side, which can turn a two-man job into a single-man crew.

In a right-hand standup configuration, an operator can be in and out of the truck several hundred times a day so Mack shorted ground-to-floor height to 16-inches, among the lowest in the industry among major manufacturers.

To help expedite trash collection from the right side, that driving position is equipped with a toggle lever that will shift the truck between drive and neutral while also applying the service brakes. This lets a one-man crew quickly start and stop the truck without having to touch the transmission controls, the brakes or the accelerator.

Mack doesnt offer its mDrive transmission in the LR model, instead relying on the vocational prowess of an Allison 4500 RDS six-speed.

With the torque converter in front of it, youve got that little bit of extra torque at launch, Dorwart says of the Allison.

It may save the day as far as the route is concerned, Dorwart says of GuardDog Connect. If you get a dash light, the telematics can tell you what the problem is and maybe its not severe enough to warrant pulling the truck off the route immediately.

With so many body builders in the refuse segment upwards of a dozen Mack has simplified much of the upfitting process. The LR is equipped with wiring channels and an additional wiring channel through the split in the windshield for installation of a camera system. Fuses are accessed through the top of the dash.

The LR model was initially available only as a 64, but last year the company introduced a 42 configuration with shorter wheelbase and improved maneuverability.

Macks LR is a no-frills upgrade in the refuse segment, a market of which Mack currently owns about half. It offers increased levels of comfort and convenience to a job that is often thankless and I think drivers will appreciate that.