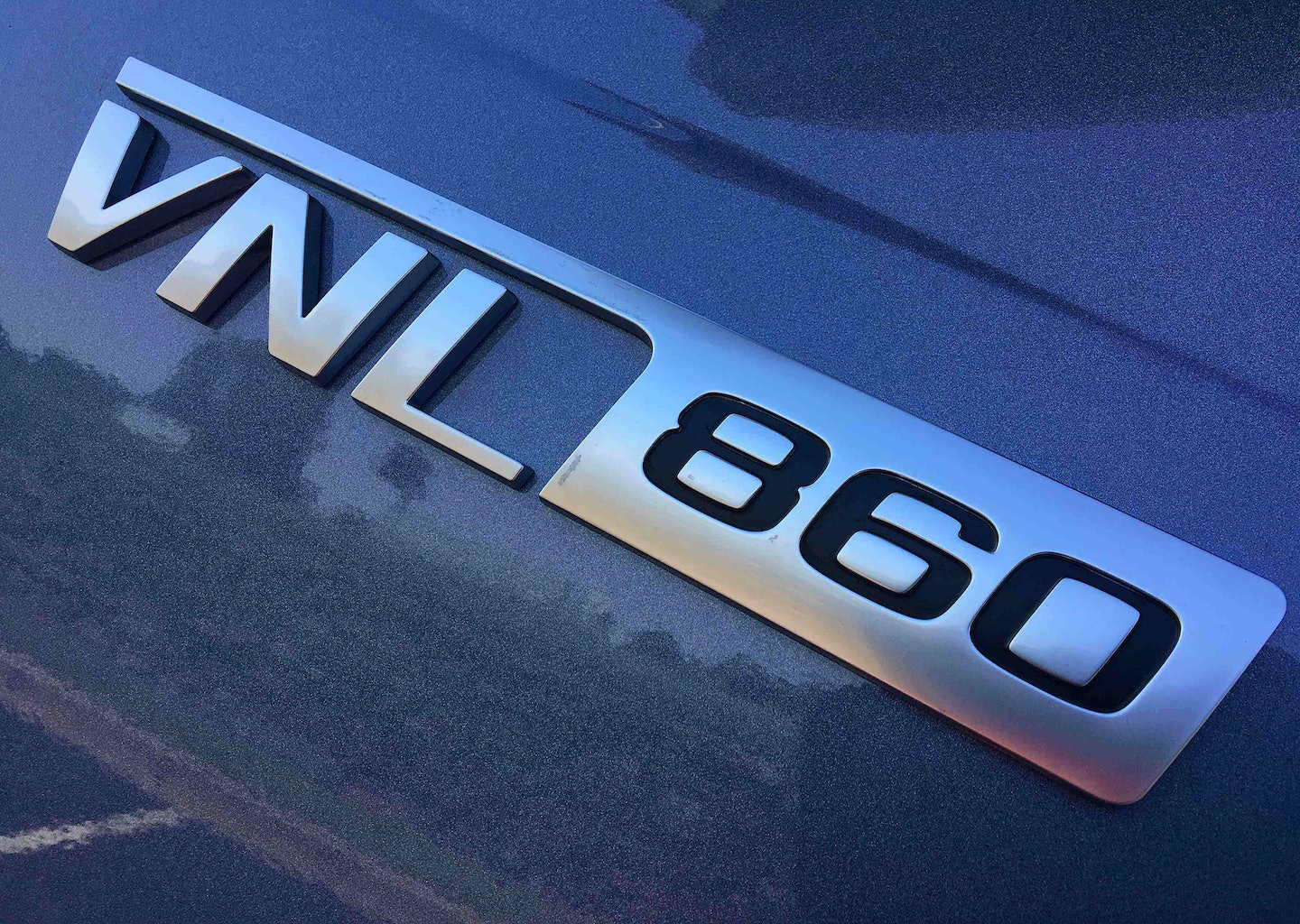 For more than 20 years, Volvos VNL has been the torchbearer of the companys U.S. truck catalog. Not only is it the historical leader in order volume, the long-haul tractor has served as a rolling proving ground for innovations that ultimately have found their way to many of Volvos trucks.

The VNL gets a new look for the coming model year, borrowing several design cues from its VNR regional-haul sister, which was introduced earlier this year as the successor to the VNM, and Volvos SuperTruck project.

Aerodynamic improvements which aid in a 1 percent fuel economy gain include repositioned, turbulence reducing  air intakes, an aggressively sloped hood and tapered fenders that keep air attached to the sides of the truck as it moves rearward. Chassis fairings are moved closer to the ground, cutting the affects of crosswinds.

As much thought and effort went into the tractors aerodynamic footprint, Volvo Trucks Product Marketing Manager Jason Spence says the new truck was principally designed around the driver.

All along the way, drivers have had input on the design and it has influenced the direction of the design, he says. We have an intention when we design the truck, but we always need that feedback.

All lights are LED, which trims power consumption while providing softer lighting, and the trucks headlamps are the only ones on the market that have the ability to defrost themselves a function enabled by fan motor placed in the back of the lamps that reverses flow when temperatures drop below freezing.

While the trucks exterior design changes are striking, the many of most obvious enhancements are at the drivers fingertips.

The first thing you notice is that the ignition switch has been relocated to the lower left side of the steering wheel.

Volvos Position Perfect steering wheel, which was introduced on the VNR earlier this year, also will be available in the VNL. The three-way positioning system allows the 18-inch steering wheel to tilt up to 20 degrees in relation to the column as well as traditional column tilt and telescopic movements to accommodate drives of various heights and girths.

The new steering wheel features 21 tactile buttons that bring many of the functions previously integrated into a stalk onto the wheel itself. The buttons allow the driver to navigate a 5-inch color LCD driver information display, use the phone hands-free and use the cruise control functions without having to take a hand off the wheel. The engine brake, turn signals and windshield wipers are the only functions that remain on the stalk.

The idea of so much function attached to the wheel can seem overwhelming, but button placement is intuitive and simplistic.

The trucks 10-gauge instrument cluster has the familiar analog feel of previous generations while the driver information display offers an array of information ranging from tire pressure to fuel economy. You can toggle through the menu options via a switch mounted on the right side of the steering wheel.

USB and 12-volt power supplies have been moved adjacent to a storage tray in the top of the dash, keeping charging wires from hanging down and obstructing switches and AC controls, and keeping mobile devices from clogging up cupholders.

Every VNL truck features a modular rail system that allows for the addition of up to four cupholders and an assortment of aftermarket storage options. Removable floor insets hide fasteners to a rear engine access panel while also superbly insulating the truck against road noise. Interior door panels were redesigned to move the speaker for better sound quality and window and door switches moved for convenience.

Sales of the Volvo powertrain hit record levels in 2016 with Volvo engines making up 94.5 percent of all orders. With GHG17 emissions regulations now in play, a new option was placed into rotation.

Volvos turbo compounding D13 uses a waste heat recovery system to increase brake thermal efficiency and is the companys most fuel efficient offering. The setup puts about 50 extra horsepower back into the engine, allowing for a high-degree of downspeeding at a range of 1,000-1,200 RPM. Peak torque is available down to 900 RPM about 200 RPM above idle.

The engine is strong, pulling a 77,000 gross around the North Carolina interstate for roughly 150 miles with 455 hp and 1,850 lb-ft of torque. Volvos turbo compounding setup is unique in that one turbo doesnt simply feed air into another. The single fixed turbo system sends exhaust to the compressor wheel that pressurizes intake air through the charger cooler in one direction. In the other direction, it supplies exhaust pressure to the turbo compounding unit, which uses an extra turbine wheel positioned in the exhaust stream and is connected to a fluid coupling. That airflow turns a network of reduction gears until the energy is returned to the crankshaft.

In the days of waste heat recovery past, the extra horsepower was added to the top end of an engines power band, which meant drivers had to give the truck full throttle to get maximum horsepower. The Volvo set up adds the 50 extra horsepower to a base of around 400, depending on engine spec, and takes work off the engine by turning some of the otherwise wasted exhaust heat into energy. Plainly put: you burn less fuel to do the same amount of work.

The new setup is powerful and quiet.

Integrated with the turbo compounding D13, the I-Shift transmission will run and hold in 11th gear at lower highway speeds as the load dictates. It doesnt search for gearing and shifts are smooth and predictable. With RPM of about 1,130 in direct drive, drivers will see full-efficiency even in city conditions, allowing trucks to run in slower speed zones without sacrificing fuel efficiency benefits. Turbo compounding accounts for a 3 percent fuel efficiency boost versus the standard D13 engine thanks partially to the 2.47:1 rear axle ratio that was designed to optimize this engine setup.

The new-look VNL was also outfitted with a front sway bar that enables finesse steering and improves handling by mitigating over-steer. The more responsive steering is both remarkable and immediately noticeable as twitches to the wheel more smoothly center the truck in its lane rather than sloshing it from side-to-side and giving it a top-heavy feel.

As with all highway-roving Volvo products, safety is paramount. Volvos Active Driver Assist, integrated with Bendix Wingman Fusion collision warning and mitigation platform, is standard on all VNLs and is a feature I was able to test when a four-wheeler in front of me decided to skid to a halt to make a right turn from the center lane.

The VNL will be available in five configurations: day cab, 40-inch flat-roof, 70-inch mid-roof and 70- and 77-inch high-roof. The VNL 670 was the best-selling Volvo truck for long-haul for almost two decades, but moving forward the 61-inch high-roof sleeper will be replaced by the VNL 760 and its 70-inch sleeper. The 780 will be supplanted by the 860.

For the coming model year, Volvos Globetrotter package will make its U.S. debut on 760 and 860 models. The luxury package was introduced in Europe in the late 1970s to accommodate drivers who spent the most amount of time on the road and will target long-haul drivers in the U.S. looking for premium home-like comforts, a full aerodynamic package, polished wheels, high-end seats, power inverter and parking cooler.

In almost every case, the sleeper portion of a test drive truck is just along for the ride. Theres no call for a break or a nap over a 150 mile trek through northern North Carolina, but I spent Thursday night tucked snuggled into a VNL 740 mid-roof.

The tight sleeping quarters were cozy (Im 59) and the experience felt more small efficiency apartment than summer camp bunkhouse. Much of this can be attributed to the interior fit and finish, including a mattress that is every bit as comfortable as the one in your home. It takes a lot to make 70-inches of sleeping quarters feel anything but small, but Volvo managed to do just that by carrying its attention to detail and design into the bunk and treating it as part of the process rather than an afterthought.

A cabin control panel on the rear cab wall gives the driver easy access to USB and 12 volt charging and lights, audio and cabin temperature controls without having to get up. An additional door lock switch and panic button add a level of security.

Airplane-style shades replace curtains and fasteners and a dense magnetic blackout curtain between the drivers compartment and the bunk chokes out whats left of the sun or streetlights.

Bunk options include a dinette/work station and a reclining bunk originally introduced on the Volvo FH in Europe, which lets the driver to sit up in bed while relaxing or watching television. The head raises and lowers with a lever mounted on the left side, similar to what you would use to adjust a seat. When combined with a wall-mounted pocket table, this set up makes for a comfortable workstation.

All new VNL models with the exception of the VNL 760 go into production later this month. Production on the VNL 760 kicks off in November.

Volvos out-going VNL is still by most accounts a modern design and was well ahead of its time at when it debuted in 2002. With the introduction of the refreshed lineup, the venerable VNL leaps from modern to cutting edge with its 14.2 percent share to-date of the U.S. long-haul market in tow.